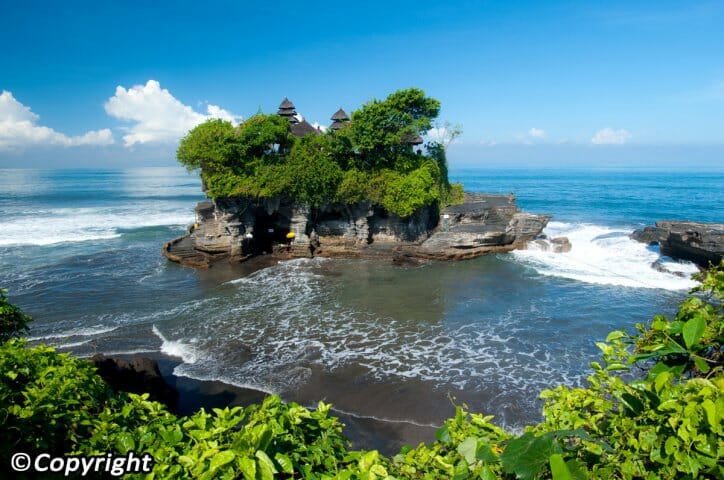 Tanah Lot Temple is one of Bali’s most important landmarks, famed for its unique offshore setting and sunset backdrops. An ancient Hindu shrine perched on top of an outcrop amidst constantly crashing waves; Tanah Lot Temple is simply among Bali’s not-to-be-missed icons.

The onshore site of the Tanah Lot temple complex is dotted with smaller shrines together with visitors’ leisure facilities that comprise restaurants, shops and a cultural park where regular dance performances are shown regularly. The temple is located in the Beraban village of the Tabanan regency, an approximate 20km northwest of Kuta. It is often included on sightseeing and cultural tours to Bali’s western and central regions.

Dang Hyang Nirartha, a high priest from the Majapahit Kingdom in East Java travelled to Bali in 1489 to spread Hinduism. He arrived at the beautiful area and established a site honouring the sea god, Baruna. Here, he shared his teachings to Beraban villagers, only to face opposition from the village chief who soon gathered his loyal followers to dispel Nirartha. The priest resisted, incredibly shifting a large rock he meditated upon out to sea while transforming his sashes into sea snakes to guard at its base. The rock’s original name, Tengah Lod, means ‘in the sea’.

Acknowledging Nirartha’s powers, the humbled chief vowed allegiance. Before setting off, Nirartha gifted him a holy kris dagger, which is now among the sanctified heirlooms of the Kediri royal palace. Pilgrims bring these relics each Kuningan day by foot on an 11km pilgrimage to the Luhur Pakendungan temple, the priest’s former meditational site.

After centuries of large waves persistently crashing at its rock base, Tanah Lot faced the constant threat of erosion, reaching a significant decline in 1980. Local authorities carried out preservation efforts to Tanah Lot and other historical sites island-wide with aid from the Japanese government. Fully restored, a third of the present rock is artificial.

At high tide, waves flood the causeways making it impossible to cross. At low tide, you may cross to view the base where the legendary ‘guardian’ sea snakes dwell in crevices around the Tirta Pabersihan fountain. This natural spout is the source of holy water for all temples in the area. Priests at the fountain bless visitors by sprinkling them with the water. You can cup your palms and take a sip to prove it is amazingly freshwater.

Onshore temples include the Penyawang, a spiritual proxy to Tanah Lot that hosts pilgrims when the main offshore temple is inaccessible during high tide. Other smaller temples around the site host prayer sessions for various aspects of the villagers’ agrarian life, from good rice harvests to rites of passage. North of Tanah Lot is Batu Bolong, similarly built on a rock formation with a ‘hollow’ overpass linking to the mainland.

Convenient pathways and well-kept tropical gardens line the grounds from Tanah Lot to Batu Bolong, with resting spots offering shades and good viewpoints to both outcrops. Art shops selling souvenirs of all sorts line the pathway from the parking area to the temple, also with peddlers selling traditional snacks such as jaja kelepon – yummy, must-try palm sugar-filled gelatinous balls rolled in grated coconut.

Good to Know and What Not to Miss

Although you cannot enter the main temple grounds of Tanah Lot, the panoramic views and cultural offerings around are highlights to enjoy. On the holy day of Kuningan, 5 days prior to the temple’s anniversary, the pilgrimages are festive parades worth witnessing.

Tanah Lot’s piodalan anniversary falls on a Wednesday following each Kuningan on Bali’s 210-day Pawukon calendar. You must dress and act respectfully as on any temple visit in Bali.

Large waves near the rocks are hazardous. Always take extreme care and obey warning signs. For further safety measures, members of the Balawista lifeguards take shifts to lend a watchful eye at several key points along the coast. Entrance tickets and parking coupons include insurance coverage.

On combined day tours, try reaching Tanah Lot in the early afternoon to explore the site, then head on to the Surya Mandala Cultural Park’s grand open stage near Batu Bolong to see the sunset Kecak ‘fire dance’ performances (held daily from 6.30pm), then stay on for dinner at one of the restaurants on Sunset Terrace. There are Western and Asian selections, but Bali’s favourite spicy sauced grills and seafood are must-tries – paired with ice-cold beers and views of the temple.